Welcome to another installment of Fun-Size Friday! Once again I get to talk about whatever I want, with the sole caveat being that I keep my thoughts on each topic to a hundred words or less. That includes this introduction, by the way. Any more than that and it becomes a rambling mess, although now that I’m writing this all down, “rambling mess” is a pretty apt description for the “Fun-Sized” posts. Is it too late to start changing names, or maybe it’s early enough that I can get away with it oh shoot I’m doing it again just start! 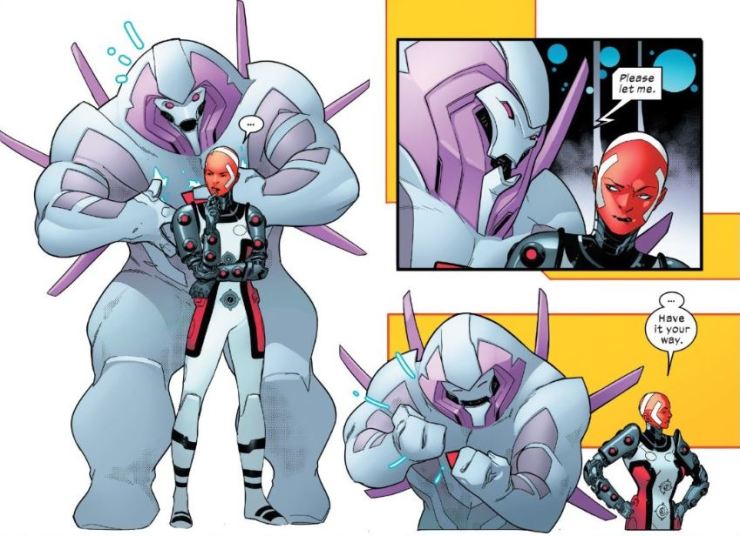 Following the premiere of House of X #1 last week, writer Jonathan Hickman continues his mission to change X-Men comics forever with Powers of X #1. Last week’s issue was heavy on world building and while this issue continues to expand that world – say hello to Terrible Future Timeline #616! – there’s at least a few moments to focus on character work. It’s also a great showcase for artist R.B. Silva; his expressive character work really shines in some key moments, as seen above. Short version: so far so good, but I’m still being cautious. We’ll see what happens next week.

I watched The Fast & The Furious: Tokyo Drift the other night and you know what? I’m not buying it. Look, I’ve been asked to swallow a lot of crazy in the last three or four movies: people surviving eight-story falls by landing on top of cars; eighty mile long airport runways; however “God’s Eye” works. However, you honestly expect me to buy Lucas Black as a teenager? I’m sorry, but that’s where my suspension of disbelief snaps. Now, Idris Elba as a superhuman terrorist? That just works.

I Have Some Thoughts About Fire Force

I’m not a huge anime guy, but I’d seen a lot of positive buzz around the Fire Force TV adaptation. Curious, I decided to check out the source material and bought the first volume of the manga. From what I’ve read so far, author Atsushi Ōkubo is a decent writer and a more-than-capable artist but *sigh* the fan-service. Like, there’s this one female character introduced in the last chapter whose whole gag is that she keeps getting accidentally “bad touched” by random people. Sadly, it kind of soured the whole thing for me. It was fine overall but still, ugh.

The 90’s Film That Disney Forgot

Am I the only one who remembers A Goofy Movie? The classic Disney animated film released in theaters back in 1995? Errr, Pauly Shore was in it? Okay, it may have a bit of a niche audience right now – I’ll bet you have no idea who Pauly Shore even is – but that just makes it all the more important that I get the word out. This movie is solid; not only is it an unabashedly 90’s movie (skateboards, pop stars, radical wardrobe choices) it’s also got some original music, dynamic animation and some surprisingly emotional moments. It’s a fun time.

This Right Here? This Is Good Comics.

Back in the world of comics, there’s one series I read that I can unequivocally recommend: Coda, specifically Volumes One & Two by artist Matías Bergara and writer Simon Spurrier. Boom Studios – a comic book publisher I’m gaining more and more respect for – describes Coda as a cross between Lord of the Rings and Mad Max; an apt comparison as it feels like energy is radiating off every page. From Bergara’s breathtaking artwork to Spurrier’s knack for witty dialogue, from the colors all the way to the lettering, Coda is firing on all cylinders; it’s a solid “must buy” for me.

A Simple Walk Into The Upside-Down

Two weeks ago I spotted this little number at Barnes & Noble — Stranger Things: Worlds Turned Upside Down — described as a behind-the-scenes companion to the popular Netflix series Stranger Things. I’m not a die-hard fan by any means, but I’ve enjoyed the show and thought the book looked interesting, so I took a gamble and picked it up. It’s a good read, maybe not as exhaustive and in-depth as I initially thought, but there’s certainly enough here to satisfy fans. It really goes to show how much of a labor of love the series is. Just don’t pay full price, maybe?

By the time this post goes live I’ll be finishing up my week-long vacation in beautiful sunny [LOCATION REDACTED]. Hopefully by the end of this I’ll be feeling refreshed, restored, and ready to get some serious writing done. These fun-size posts are a useful exercise, but I’ve got three or four drafts in various states of completion that I’d really like to wrap up some time before the end of 2019. I know there’s no actual deadline to complete them, but I’m getting real tired of leaving work unfinished; it’s time to knuckle down…right after this s’more.