The last week has been an unusually busy one even by my usual standards, full of good things (I went to my first comic book convention!) and less-than-good things (work). None of that matters now though because I just remembered that Netflix dropped the full first season of The Dragon Prince to stream yesterday and I literally can’t focus on anything else until I sit down and watch this thing. It’s taking everything I’ve got just to finish writing this introduction!

For those of you who don’t know or may have forgot (like me), The Dragon Prince is the latest offering from co-creator Aaron Ehasz, a writer whose resume includes one of my all-time favorite animated series, Avatar: The Last Airbender. As both a co-executive producer and the head writer, Ehasz was responsible for penning some of the very best episodes of Avatar, so you’ll forgive me if I’m going into this with unrealistically high expectations. My only real concern is the animation; in still photos it looks good enough but just from watching the trailer I’m a little confused why they went with this particular style. Perhaps it’ll grow on me.

Anyway, seeing how Netflix is dropping nine episodes all at once I figured I’d try what all the cool kids are doing nowadays and attempt a “binge watch”. Then I figured as long as I’m doing this, heck, I might as well write my thoughts on each episode as I watch them because, I dunno, I need to write something this week. I’m gonna do my best to keep my thoughts as vague and spoiler-free as possible but, you know, read at your own risk.

Alright, let’s do this thing!

Chapter One — Echoes of Thunder

Wow, does the first episode fly. Considering this had to set up the history of this new world (can’t remember what it’s called), introduce six (correction: seven) different kinds of magic, and introduce us to multiple new characters (can’t remember a name to save my life), I’d say that this was an excellent start. Definitely feels like the first part of three and practically demands you watch another one. Biggest highlight was seeing my younger siblings realize one of the main characters is voiced by Jack De Sena, the hilarious voice behind Sokka from Avatar. Predictably, he’s great here, too.

Chapter Two — What Is Done So the elf kingdom is called Xadia, the elf girl is Rayla and the two Prince’s are Callum and Ezran. Ha, nailed it! The animation is less distracting to me, though the more dramatic moments don’t work quite as well. Once the action starts it flows a ton better. Really enjoying that there’s no straight up-villains (at least not yet), just a lot of confused and angry people trying to do the right thing. A solid continuation of the first episode. Side-note: the pictures in the end credits are changing every episode, and I love it. 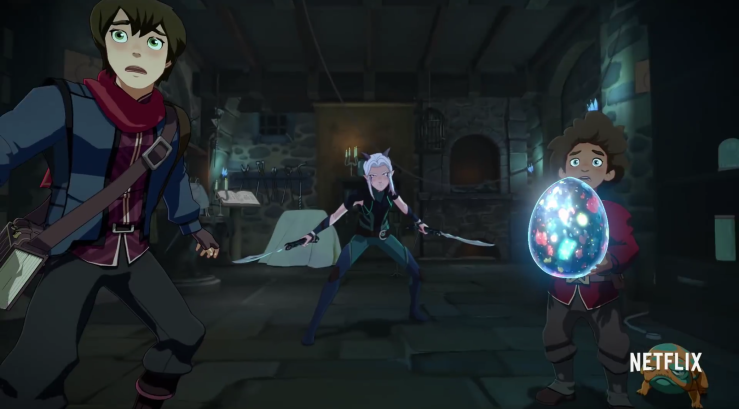 Have I mentioned this show has some really good music in it, too? So far it’s been doing a great job of capturing the tone of this fantasy world. Anyway, this is the end of the introductory three-parter and I think at this point it’s safe to say I’m in this series for the long haul. Characters are established, names have been learned, fun jokes were shared, and our heroes can begin their journey proper now. On a side-note, the designs for the Moonshadow Elves when they’re in stealth mode? So cool.

I have to admit I wasn’t completely sold on Rayla the elf assassin, but this episode was a good showcase for her character, showing us what she’s like when she’s not wrapped up in the whole “honor bound warrior” thing. She provides a welcome balance of sarcasm to balance out the more honest Prince’s, getting plenty of funny lines sprinkled in throughout the episode. I guess you could say she puts the “sass” in assassin [canned laughter]. Also we get an awesome lady general who communicates through sign language, which is a pretty awesome thing to see in any story.

A lighter episode this time around with a few interesting tidbits thrown in that will no doubt turn out to be important later. Still a couple solid moments here and there, though. Awesome Lady General aka “Aunt Amaya” gets some welcome focus here. There’s one very effective scene where her sign language isn’t translated that still manages to capture her feelings perfectly, a testament to the quality of the animation combined with the music. More scenes like this, please and thank you!

Chapter Six — Through The Ice

The story was fine, though it seems like pieces are still just being moved around without any real momentum. Our antagonists get some very interesting development this time around, though. Little Prince Ezran got some focus this time around and there’s still plenty of drama with our supporting cast. Not sure how I feel about the characters using anachronistic terms like “hangry” though. That, and “say hello to my little friend”.

Chapter Seven — The Dagger and The Wolf 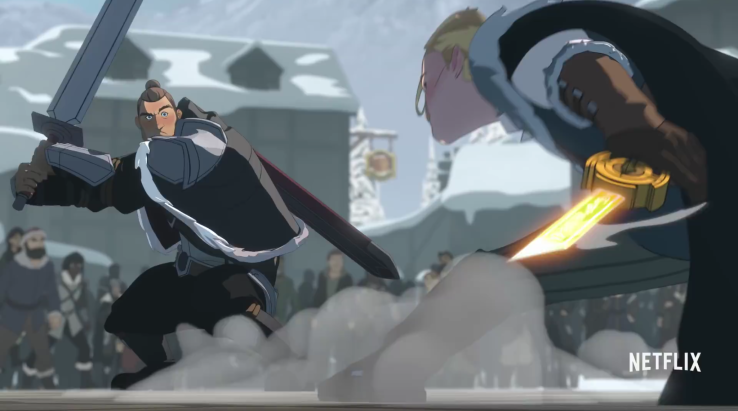 This episode was pretty sweet. Rayla the deadly elf assassin is lightening up considerably despite her current predicament. Balancing the tone between humor and drama has worked fairly well the past couple episodes, although there have been times where the jokes felt a tad out of place for me. For example, there’s a scene where the Prince’s try the old “So we’ve got this…friend who has this problem” routine, and it’s like just once I’d like to see characters in a cartoon lie to someone convincingly. Just a random nitpick.

The One Where Everyone Just Kinda Sits Down And Reflects On The Past Seven Episodes. Two characters from the last episode make an unexpected return here, although honestly I’m not quite sure they add all that much. I think they may have worked better as “one and done” characters, as they’re a reminder that the heroes current insurmountable challenge is actually pretty darn surmountable. Our lead antagonist gets a couple creepy moments to show off and those work very well. Feels like with only one episode left things should be ramping up. We’ll see if they stick the landing.

This was a pretty strong finish all things considered. All our heroes immediate problems were more or less resolved, perhaps a bit too neatly, but that’s a minor complaint. Our three heroes each got their own little moment to shine, which was awesome. Our antagonists continue to be charming although mostly inconsequential, the past three episodes with them basically boiling down to “aaalmost there”. As the season finale it works fine enough, hopefully all this set-up pays off and we get some meatier episodes in future seasons (assuming there will be future seasons).

I have to admit the first season didn’t finish quite as strongly as it started for me. I can’t help but feel like they could have condensed the story down to six or seven really solid episodes, but even the slower ones had some pretty fun stuff in them. I think the show works a lot better if you look at the season as one complete story rather than taking it chapter by chapter (oops). I don’t know if this series was always meant to be on Netflix or if the creators had shopped it around first, but the binge format definitely works in the show’s favor.

In the end, The Dragon Prince entertained me, which is all I really wanted going into this. It would be unfair to compare to Ehasz’s entire body of work on Avatar at this point, and honestly even Avatar hadn’t completely found itself in it’s first nine episodes. Hopefully Netflix green-lights more episodes because there’s definitely enough material here to establish a solid foundation here for future stories and plenty more directions they could explore. If you enjoyed Avatar: The Last Airbender, or if you just enjoy action-adventures with a nice balance of drama and comedy, I would definitely give The Dragon Prince a look.

Phew, that was an investment. I haven’t really given Netflix animated series a lot of attention in the past but this show was a welcome little diversion. If this is the kind of quality shows Netflix wants to put out then perhaps I should give some of their other animated shows a watch. To those of you who are more savvy when it comes to streaming services like Netflix, are there any other animated series you’d recommend? The extent of my knowledge so far is a couple episodes of Voltron: Legendary Defender but that’s about it for me.

All images used for the purpose of this review are the property of Netflix and Wonderstorm Studios. I own nothing.