Isn’t it interesting how old forgotten things from our past find their way back into our lives? A crumpled up dollar bill you find in your pants pocket; a box of toys you stumble across during spring cleaning; running into an old friend from your high school days at the grocery store. They must have had some value to us once, some presumably more than others, but then for one reason or another we simply stopped thinking about them until one day, out of the blue, they sneak up on us. Moments like that make me wonder why those things were so important to me in the first place and, if they were, what does it say about me that I could forget them so easily?

Where am I going with all this? Well a couple days ago I went looking through my Comixology account to find a new comic to read, only to discover a number of unfinished or unread books from years back. I love reading comics, but the embarrassing reality is that I’ve looked over a lot of those titles now and, for the life of me, I couldn’t tell you why I own most of them. There’s an uncomfortable number of instances where it looks like I was just buying whatever was trendy at the time, never stopping to consider if I actually wanted to read it in the first place. Talk about “disposable income”.

I’ve mentioned going through comic book burnout on here before — those times where I had to step away from comics completely and get my head straight — and it lines up pretty closely with when I picked up these particular titles. It seems that when I finally started reading regularly again there were quite a few books that got lost in the shuffle, which is a shame, because as it turns out there were some hidden gems buried under all those impulse buys and flavor-of-the-month titles. One such discovery was Moving Pictures, by Kathryn and Stuart Immonen.

Admittedly my knowledge of the Immonen’s work is largely limited to their experience working for Marvel Comics, but just based on that alone they’ve built up quite the impressive resume. Kathryn has written for a number of titles including Patsy Walker: Hellcat, Heralds, and Journey Into Mystery, while Stuart’s artwork has been featured in Ultimate Spider-Man, Nextwave: Agents of Hate, and the 2010 event series Fear Itself. That’s just a few of their accomplishments from the last decade or so, but in addition to all that the Immonen’s have also written, drawn, lettered, and posted their own webcomics on the side, the second of which we’re looking at today.

The story takes place during a particularly tumultuous period in our world history: World War Two, specifically the occupation of Paris by German forces. It centers around the interrogation of Ila Gardner; an art curator, by Rolf Hautmann; a German officer, in regards to some pieces from her museum that have gone missing. As the conversation continues, we get to delve deeper into these characters histories and motivations through flashbacks, and we discover there is a lot more going on between these two than it would seem at first glance. Like many of the paintings that are referenced here, there are layers upon layers of complexities just beneath the surface, and we are reminded that the line between what’s right and what’s wrong isn’t always so clear, especially when you’re in the middle of a conflict you don’t understand.

The art here is particularly noteworthy; Stuart Immonen has a special talent for reworking his style to fit the tone of the story and this book is no exception. The minimalist style at play here, combined with thick lines, heavy use of shadows, and the jagged nature of the world and it’s characters, do an excellent job of conveying the overall harsh and dangerous setting. On that note, one thing I didn’t even consciously notice until I read it through a second time was that there are hardly any soft edges or curves to be found. The things that do have those softer shapes, like a loaf of bread or a small pocket-watch, are the items that provide a sense of comfort and normalcy within the story. As one might expect though it is the various sculptures and paintings that get the most love and attention here, emphasized by the Immonen’s decision to depict them in a photorealistic style to highlight their importance both to the reader and to the characters themselves.

Another interesting choice by the art team is the way they use the characters eyes, or lack thereof, to communicate the level of affection they have for others. You’ll notice that a majority of the time their eyes, if not their entire faces, are completely shrouded in shadow, even during their more private and intimate moments. It’s a brilliant way of keeping the reader from connecting to the characters as well as showing the emotional dissonance between the people and their world. It’s the moments where we can see their eyes that we get a glimmer of who they really are underneath their hard exterior, their fears and insecurities, and the Immonen’s are careful to save those moments for when they’ll have the most impact.

The writing by Kathryn Immonen in this book has some of the most nuanced character work I’ve seen from any story in quite a long while, from the bit players in the story all the way up to our two leads, Ila and Rolf. It would have been easy for Kathryn to skimp on developing her characters here and fall back on the standard tropes of Heroes vs Nazi’s for the sake of a more straightforward plot — and I won’t deny there’s a part of me that enjoys the simplicity of those stories sometimes — but in this case she really went the extra mile. Unlike the solid black and white color scheme, the decisions these characters make throughout the story are not so clear cut.

Firstly there’s Rolf Hautmann, the interrogator and default antagonist of our tale, who is not some cackling two-dimensional maniac or another heartless monster with no redeeming qualities. In fact, through the eyes of our protagonist Ila, we see Rolf as a kindred soul with a passion for art that even she can admire, despite their diametrically opposed viewpoints. We don’t have to root for him or even respect him, but we can certainly understand where he’s coming from, and when you’re doing a story that covers this kind of subject that is very high praise indeed.

As for Ila Gardner, the poor curator trying to protect the museum’s artwork from invaders, she is not a perfect hero who acts selflessly and makes all the right decisions. There’s no grand speech at the end where she convinces Rolf to change his ways through the power of art. Without getting too deep into spoiler territory, Ila finds herself making a series of moral and emotional compromises in her quest to safeguard the things she loves most; on one hand there’s the priceless art she has been entrusted to protect, but then there are other forces at work that are pulling her away and sabotaging her efforts, and the sad truth is she’s not even certain what she’s doing actually matters in the grand scheme of things. It’s a dark outlook, but it’s also honest and utterly human given her circumstances, which makes Ila come off as a far more “real” character than other wartime heroes.

I probably don’t have to tell you that I greatly enjoyed reading this book and would certainly recommend it to anyone interested in seeing a well told and mature story about dealing with the value of things and how time and circumstances often get in the way and make us reevaluate ourselves. The fact that it’s set in WWII is an interesting detail, but as Kathryn Immonen stated in this 2008 interview with CBR:

“The history is just a backdrop to tell a f*cked up love story that’s about how we assign value to things and people, how we behave when not everyone is playing by the same rules.”

In keeping with the whole mercurial nature of assigning values to things, and because I simply don’t have a normal ratings system in place, I award Moving Pictures by Kathryn and Stuart Immonen an obligatory rating of Three Posters Flying Over The Paris Skyline out of Three.

This comic turned out to be a wonderfully deep dive with some very clever art and a powerful message about finding the value in things even when it’s difficult — especially when it’s difficult. If this is the kind of high quality work I’ve been missing out on all these years I look forward to finding more of these hidden gems in the future. No fishing for comments this time around, I will simply wish you all well and hope that you find something or someone in your life that you truly value and don’t let go. I mean, what’s the point of this whole crazy journey otherwise? 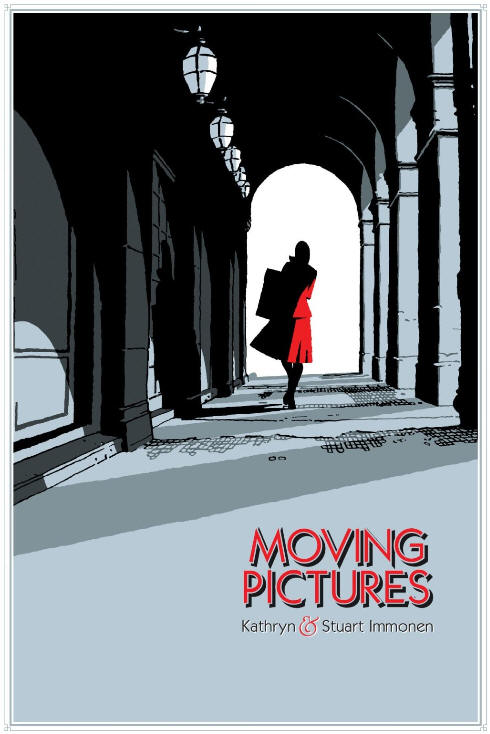 Paperback and digital editions of Moving Pictures are available to order now wherever books are sold. If possible, please consider supporting your local comic book retailer.

All images used for this article are taken from Moving Pictures, which is the property of Kathryn Immonen, Stuart Immonen, and Top Shelf Productions. I own nothing.