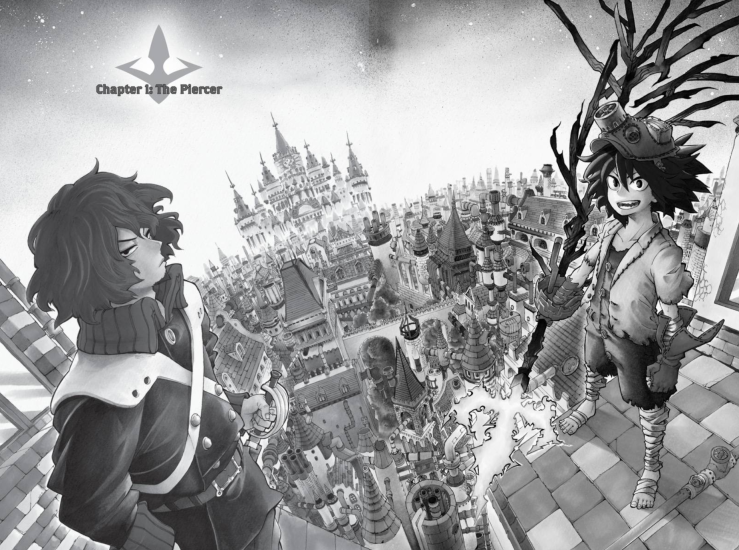 Whether you’re a reader who enjoys comic books of the Japanese variety or you’re a connoisseur of action-packed shonen anime, chances are high you’re familiar with the hit series Boku No Hero Academia (僕のヒーローアカデミア), or My Hero Academia as it’s called here in the States. Created by writer/artist Kōhei Horikoshi, the story – a class of students learning how to become the next generation of superheroes – has become a critical and financial success with interesting characters, solid artwork, and intriguing commentary on the concept of heroism. With nearly 200 chapters as of this writing, as well as an anime adaptation, a spin-off series (the first volume of which I covered here), and a feature length movie coming soon to theaters, My Hero Academia and Horikoshi show no signs of slowing down anytime soon.

It’s easy to look at success stories like these and assume the people behind them came up with a winning concept on their first try, but of course the reality is that like many of Horikoshi’s peers in the creative fields, the path to stardom was a long and winding road. Case in point, while the first chapter of Academia was released back in 2014, Kōhei Horikoshi has been working steadily as a writer and artist since 2007. Academia is actually his third series to be published in the weekly Shonen Jump magazine, preceded by Oumagadoki Zoo (逢魔ヶ刻動物園) back in 2010 and Barrage (戦星のバルジ) in 2012. For whatever reason neither Zoo nor Barrage seemed to click with readers, neither of them lasting longer than a year or so before being cancelled, their failures ultimately enabling Horikoshi to pursue his most prolific work to date.

Being a big fan of My Hero Academia, I was curious if I could find any copies of Zoo and Barrage to peruse and see how Horikoshi’s work has developed overtime, though I didn’t hold out much hope. Sadly, as is the case with a lot of manga series that get cancelled early on in their runs, there is little chance if any for officially translated copies to make their way over stateside, not counting the underground efforts of dedicated fans. The results of my amateur search efforts bore bittersweet fruit; while there are no official English translations of Oumagadoki Zoo available at the moment, Viz Media has graciously released both volumes of Barrage in print and in digital format. Having sat down to read the complete series, I thought I could take a moment to discuss Kōhei Horikoshi’s second official series, Barrage, aka The Series That Had To Die So My Hero Academia Could Live. The story begins on Planet Industria, “a certain planet in a certain galaxy” at the center of an interplanetary conflict known as The Warring Planets Period. Aliens from all over have arrived to take the planet for themselves and enslave it’s inhabitants with only a few scattered pockets of resistance in place to fight back. The capital city is the largest bastion of defense left, and even there the people are suffering from disorder and a lack of adequate resources, the aliens who operate in the capital getting braver and bolder with every passing day.

Still, there is a glimmer of hope: a ancient treasure exists known as the Orgue, a powerful weapon passed down through the royal family line, which could potentially turn the tide against the alien invaders and restore peace to the wartorn planet. Unfortunately that hope has all but diminished; the weapon can only be wielded by one with the qualifications to be king and the Orgue’s current owner, the supremely selfish prince Barrage, is anything but qualified. Fortunately for both Barrage and Industria, an opportunity presents itself in the form of a young boy named Astro.

Astro is our main character, utterly unremarkable in terms of brains or brawn, but exceptionally brave and selfless beyond measure. He makes his home in the capital’s slums, taking terrible jobs and living off petty change from his uncaring employers in order to support his adopted family, a group of young orphans whose lives he has taken upon himself to take care of. None of this would be of interest to Barrage, a carefree young man who will do anything to shirk responsibility. Still, this boy in the slums does possess one uncanny quality that the prince requires: in terms of looks and voice, Astro is Barrage’s perfect double. 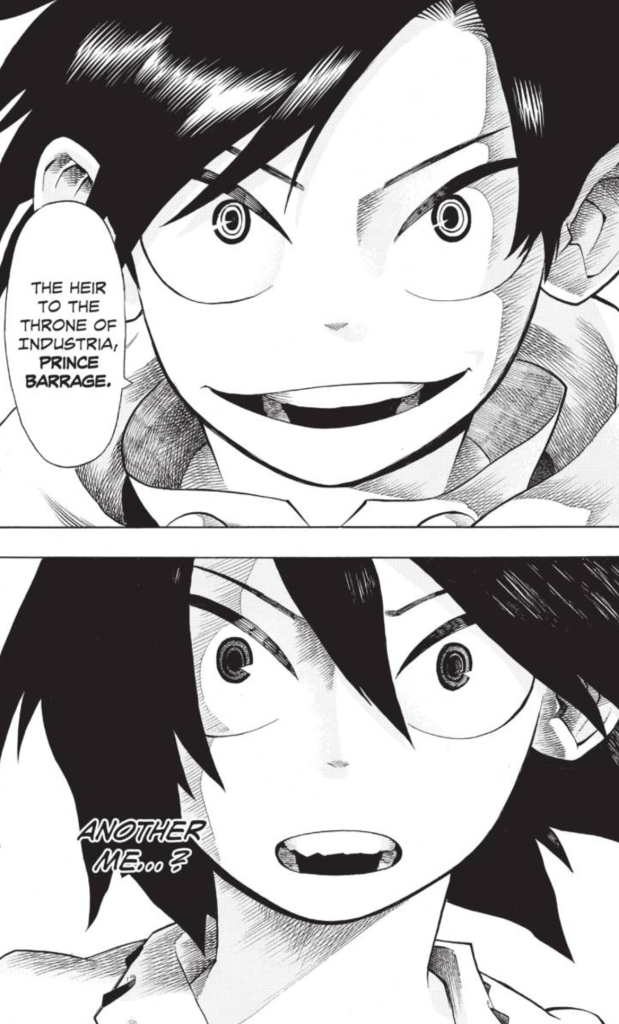 Barrage has been watching Astro for some time now and has chosen him to take the his place, the Orgue being passed on to him to confirm his royal status while Barrage himself gets away scott free. Faster than you can say The Prince and the Pauper, Astro is whisked off to the palace to take on all of “his” princely duties, first and foremost the restoration of the entire planet Industria and the defeat of the aliens who mean to do them harm. The series follows the new “Barrage” as Astro adjusts to his new position, exploring the world outside the capital, learning to master the secrets of the Orgue, and seeing his idea of family challenged in ways he never thought possible.

In the interest of full disclosure, I had actually read Barrage a couple years beforehand, having acquired an English translation through, err…less than legitimate means, and to be completely honest I had all but completely forgotten the plot until I picked it up again a few days ago. Numbering a relatively trim sixteen chapters in all, the series is a reasonably light read; an experienced reader could start the first volume and finish the second within the course of an afternoon. That’s not to say the experience isn’t worthwhile, merely that the content is not particularly dense or requires much in-depth thinking.

The big theme that Barrage is focused on tackling here is FAMILY! and if that somehow flies over reader’s heads in the first chapter, Astro will helpfully remind them at least once in every chapter following it. It’s definitely an interesting concept worth exploring, but Horikoshi doesn’t really have enough time to develop it outside of his lead character’s borderline obsessive big brother complex. By the time the story is over all we really know is that Astro is a bit thick headed and that he loooves his family; one suspects that he and Dominic Toretto from the Fast & Furious series would get along famously.

There are other characters of course, namely Tiamat, Astro’s partner and mentor during his journey outside the capital, but he too suffers from having little time to develop. Over the course of the story we figure out he’s an above-average fighter and that he gets uncomfortable talking to girls, and…that’s about it. He and Astro have a pretty standard relationship where they bicker a lot but ultimately respect each other, and that’s fine for what it is. Other characters are introduced as well but with so little time to spare between the action it’s all very fundamental; it’s a testament to Horikoshi’s skill that he’s able to make any mark at all given the ticking clock he was working under. 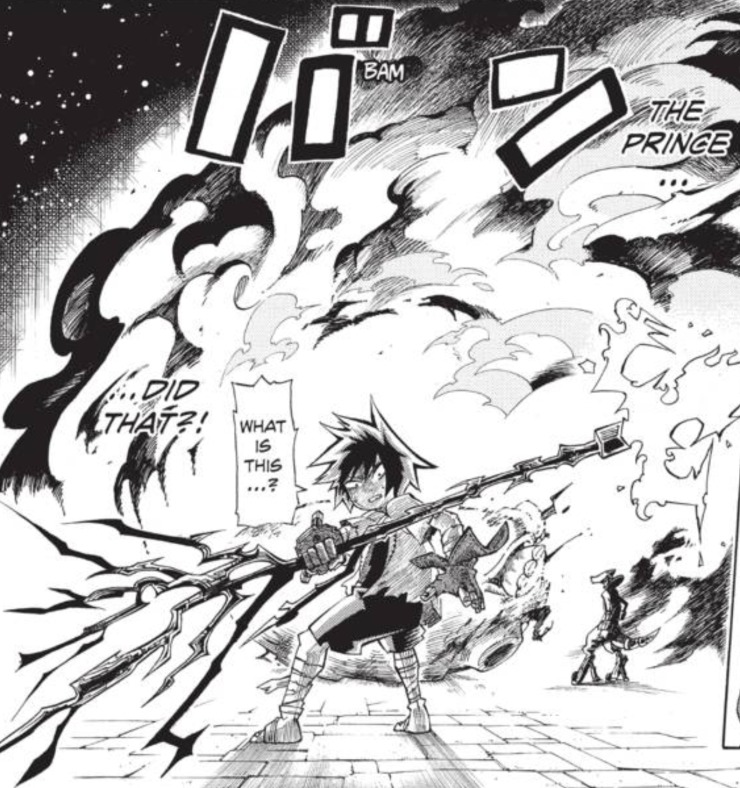 But enough about all that, let’s talk about what Horikoshi does really well in this series: the art. While the plot definitely suffered from time constraints, Horikoshi’s unique artwork doesn’t suffer one bit, staying strong from beginning to end. His pages remain creative and easy to follow, he definitely has a knack for staging the more dramatic and action-packed moments at this point in his career. These days, any comic artist worth their salt has mastered the art of the “page turn reveal”, and Horikoshi definitely knows the best moments to employ them for maximum horror and/or maximum “hell yeah!”.

He also gets a lot of opportunities to stretch his legs and play around with drawing various locations. Case in point, when Astro is first brought to the royal palace after spending his entire life in the slums, Horikoshi makes sure everything looks suitably grand and overwhelming, with appropriately giant gates, glistening chandeliers, and ominously tall hallways. It’s enough to put both Astro and the reader in a state of unease. From his depiction of life in the slums and palaces of the capital to the caves and desert towns of the outer kingdom, Horikoshi proves he is well up to the task. 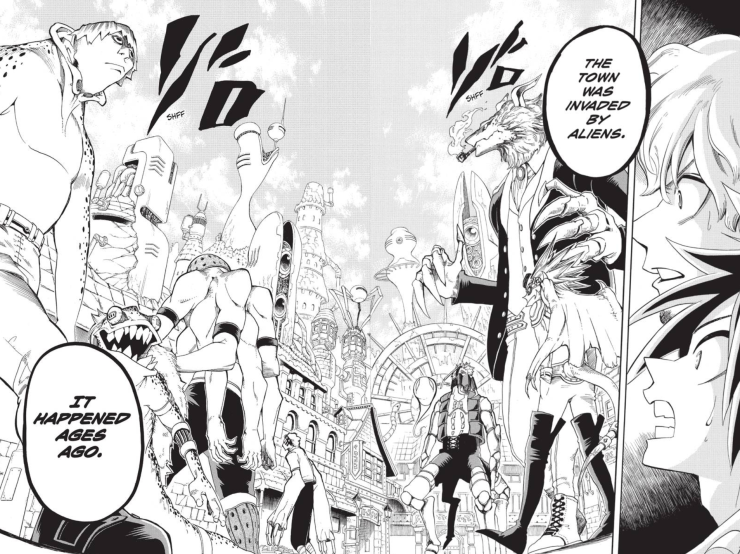 One thing I wanted to really wanted to focus on though, and this is something I’ve really come to admire in his work on Academia, are Horikoshi’s character designs. As with the superhuman characters he would later develop, the inhabitants of Industria are equally interesting to look at; from the flamboyant human characters to the otherworldly and sometimes unsettling aliens. Lizard men, rock creatures, horned demons, multi-limbed beasts of all shapes and sizes; Horikoshi makes sure every one of them is distinguishable from the rest of the pack. If nothing else, Barrage is a wonderful showcase of crazy page compositions and wild designs.

Looking at the whole package years later, it’s hard not to speculate on what might have been if Barrage had stuck it out even a few more years. Could we have seen Astro journey beyond Industria and explore other strange new worlds? What other types of aliens would he meet along the way? What other secrets might the Orgue possess? Would Tiamat ever be comfortable talking to a woman? Though the possibilities are intriguing it seems unlikely that they will ever be fully explored, at least not with Hirokoshi at the helm. Still, never say never. As it stands now I am content with how Barrage turned out: a decent comic with above-average art, decent characters and an interesting if truncated tale. I give Barrage an obligatory rating of Four King Planets out of Seven. 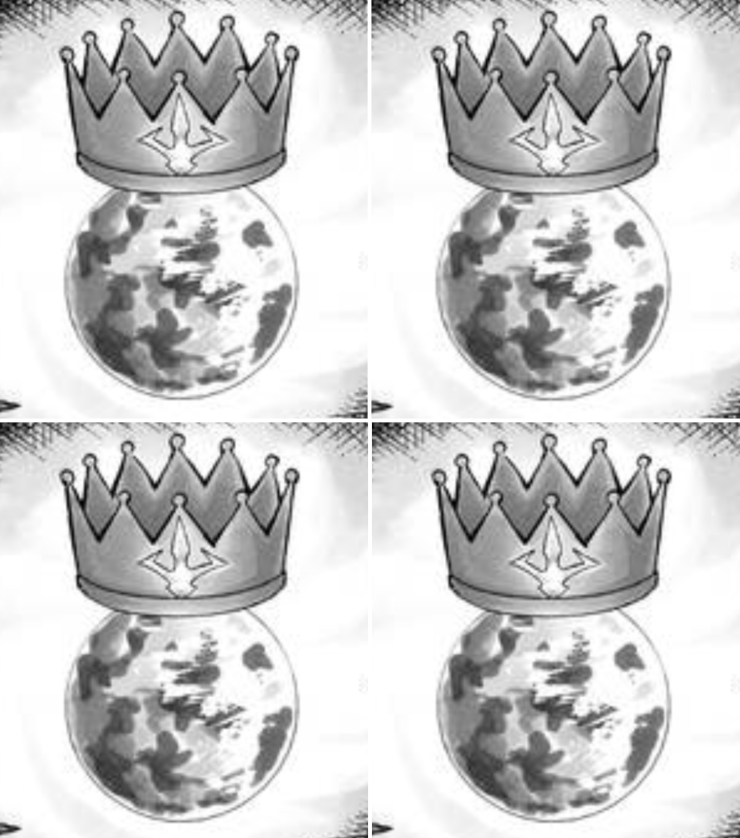 And now I really want to see “King Planet” become a thing. Sounds like something that would show up in an Axe Cop comic. Ethan, Malachai, if you’re out there you can have that one for free!

Barrage Volumes One and Two are available now. You can order the print editions at Amazon, Barnes & Noble, and your local comic book retailer. Digital editions can be purchased online at the Viz Manga website and Comixology.