By all accounts, the Teen Titans have arguably never had as much focus on them as they have in the past few weeks. On the television side of things, DC kicked off the promotion campaign for it’s new streaming service with the trailer for a new live-action Titans series, generating millions of views on YouTube alone. Meanwhile, the Teen Titans Go! animated series started it’s fifth season on Cartoon Network and released their first feature-length movie in theatres to much critical praise. One might assume that fans of the team would be thrilled, and yet based on the chatter online the reaction from fans has been polarizing at best and downright hateful at worst.

Speaking only for myself, I have never been the biggest fan of the Teen Titans, my primary exposure to them being the animated series that ran from 2003 to 2006. I could tell you the names of certain characters and a little bit about their history, but honestly I’ve never felt particularly motivated to check out more of their stories in any medium, comics or otherwise. Still, I thought with all this attention being put on the team and all these different interpretations of the characters, maybe it was time to educate myself. With that in mind, I thought I’d go back to the beginning and take a look at stories that covered the team’s origins, starting with the 2008 comic book miniseries Teen Titans: Year One.

The miniseries follows the lives and adventures of five teen “sidekicks”: Robin, Wonder Girl, Kid Flash, Aqualad and Speedy. As is the case with so many teenagers, each of them is dealing with their own issues: Robin and Kid Flash struggle with getting out of other people’s shadows and proving themselves, Wonder Girl and Aqualad are strangers in a strange land and have trouble adapting, while Speedy has learned all the wrong lessons from having a carefree male chauvinist as a mentor. All of that plus car jackers, ant-people and interdimensional monsters. So, you know, the usual superhero stuff.

The story is divided into two parts: the first three issues covering one adventure from beginning to end while the last three tell largely standalone stories with only a tangential connection to the first half. The first half begins with Batman, Wonder Woman, Flash, Aquaman and Green Arrow behaving wildly out of character, committing criminal acts and threatening innocent lives. This behavior has not gone unnoticed by their teen sidekicks who decide to combine their efforts to stop their out-of-control mentors and figure out the true cause behind their actions. The second half focuses on smaller stories including the team’s introduction to the public, a difficult first date between two team members, and a nightmare scenario that could spell the end for all of them.

Let me just get this out of the way first: unlike other “Year One” books that DC has released in the past, Teen Titans: Year One was never meant to be a definitive version of the team’s origins; merely an alternate take from a team that wanted to tell a fun story in that time period. I knew going in that this was meant to be more of a light-hearted take on the Titans and that it wasn’t going to be too beholden to continuity, which was actually a plus for me as a reader unfamiliar with the source material. All I was really expecting was a cohesive story that gave the characters moments to shine, and to be fair that’s pretty much exactly what I got. There were a few things that didn’t quite work for me, but those are mostly nitpicks that I’ll get into later. Let’s start with the things that really worked for me.

As I mentioned before my only real exposure to Teen Titans comes from the cartoon series back in 2003, which I enjoyed immensely growing up, so I was thrilled to see that Amy Wolfram, one of the writers behind some of my personal favorite episodes is on writing duties for this collection. Her character work here, as in the show, is reliably good: Robin’s skilled but unconfident, Speedy’s too cocky, Kid Flash is impulsive (of course), Wonder Girl is absolutely infatuated with “man’s world”, and Aqualad’s the sensitive one. Though there are a few moments where Wolfram’s characterization comes off a little thin, such as Wonder Girl’s all-too-simple dabblings in romance or Aqualad’s frequent panic attacks, most of it can be chalked up to the fact that they’re, well, teenagers. It’s not like they’ve really had a lot of time to develop yet and of course there are going to be times where they don’t know what to do and overreact to things. That’s all part of the teenage experience, as most comic book readers can surely attest to. If I did have one big nit-pick with the writing, and this is speaking solely for myself, it’s that I wish Wolfram had developed the first half of the story out a little more and maybe left the standalone issues for a future release. The story that she tells works fine as is, but I feel that if we had a bit more time to really see the team come together it would have been a stronger read for me. The stuff where they partner up to take down their mentors, I thought, could have had given Wolfram more room to stretch her legs and show how different characters paired up with one another, rather than have them take down major heroes in a page or less each. It’s a rare time where I thought the story could have been better told with more issues and a little more time to decompress. Overall I felt that Wolfram’s pacing was much better suited to the one-off standalone stories than the three issue arc, but what I did see worked just fine.

On the “pictures” side of things I really have nothing but positive things to say. The art team of Karl Kerschl, Serge LaPointe and Steph Peru makes sure that every character looks young, bright, and especially emotional. The Titans are teenagers after all, and no one feels emotions harder than a teenager, the art team cranking up every expression to Eleven. The Titans each have their own distinct look that helps them stand apart, and every location looks colorful and alive, from the beautiful and warm streets of Paris to the dark and musty caves the Titans use as their home base. In a way it’s like we’re seeing everything from a teenager’s perspective: everything is new and exciting, sometimes dangerous but always endlessly fascinating. 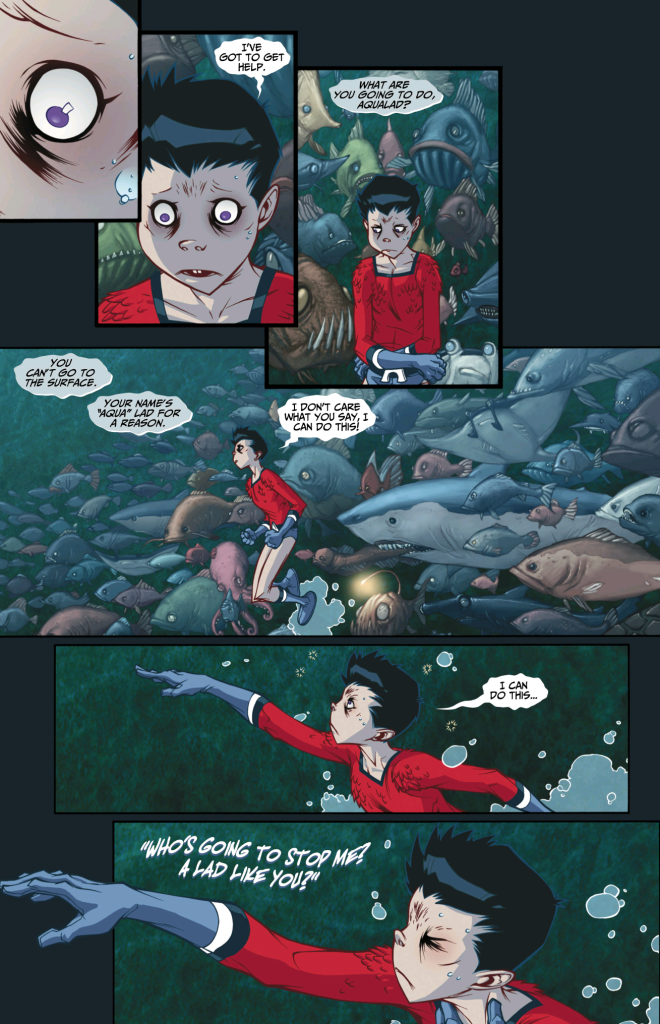 Though the art team makes sure every character stands out from one another, it is the oft overlooked Aqualad who really shines in these stories. While the other Titans come off looking like young Greek gods, Aqualad has pale skin, sharpened teeth and dark rings around his eyes, his bright red shirt and blue trunks making his awkward appearance stand out all the more. I really wasn’t sure about this look at first but now that I’ve seen Aqualad in action it suits his character perfectly. This is, after all, an Atlantean child who probably spent his entire life in a dark ocean eating nothing but fish and keeping to himself until Aquaman thrust him into the role of sidekick. More than any of the other Titans, Aqualad really embodies the role of “awkward teenager”, and the fact that he still chooses to be a hero despite all that makes him stand out all the more. Coupled with Wolfram’s characterization here I think this might very well be my favorite version of the character, and makes me desperately wish someone would pick up Aqualad where Year One leaves him.

On the whole I can honestly say I had an enjoyable time reading Teen Titans: Year One. It’s not a flawless read, but it does enough things right that I didn’t feel like I was wasting my time at all. In a time where many Teen Titans fans feel like their favorite characters are being misrepresented, Year One is a a delightfully fun experience. In light of all that, and in recognition of my abysmal Wi-Fi connection, I give Teen Titans: Year One an obligatory rating of Eight Offfline Dinosaurs out of Ten.

Incidentally was I only one who didn’t know that if you tapped any key on the offline page it starts a little “running dinosaur” game? That was a fun surprise.

Teen Titans: Year One is available now. The paperback edition can be ordered at Amazon, Barnes & Noble, and at your local comic book retailer. The digital edition can be purchased online at the DC Comics website and Comixology.